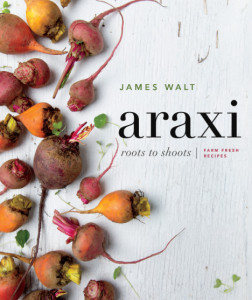 Whistler, B.C. (August 30th, 2016) – For those with a love for Whistler’s Araxi Restaurant, fans will now have a chance to bring the tastes of Executive Chef James Walt’s cooking home. With the launch of his much-anticipated Araxi: Roots to Shoots, Farm Fresh Recipes, Chef Walt shares a colourful, recipe-laden cookbook that embraces the restaurant’s spirited mountain cuisine. 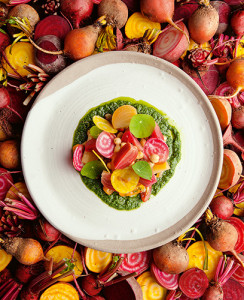 “We are absolutely delighted with how this cookbook has come to life,” Chef Walt said. 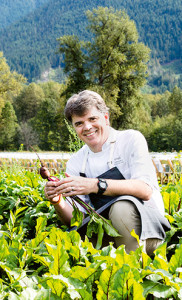 “It’s the culmination of several years of effort from our entire team, and really summarizes our philosophy of working closely with local farmers, ranchers, and coastal fisher folks,” he said. “The design by Figure 1 Publishing is striking, and we think that it will make a welcome addition to home kitchen libraries and become an everyday reference.”

“This collection of recipes is a great example of what makes James Walt one of the top five chefs in Canada,” acknowledges David McMillan, Owner and Chef of Joe Beef. “His simple ingredient-driven cuisine is intelligent, healthy and delicious. He is one of the best cooks I’ve worked with and I consider him an important mentor in my career. I love this book.”

Araxi: Roots to Shoots, Farm Fresh Recipes is now available for $37.95 plus tax at fine booksellers including Barbara-Jo’s Books to Cooks in Vancouver, through online retailers such as Indigo Books, at Araxi Restaurant in Whistler, and from Toptable Group.