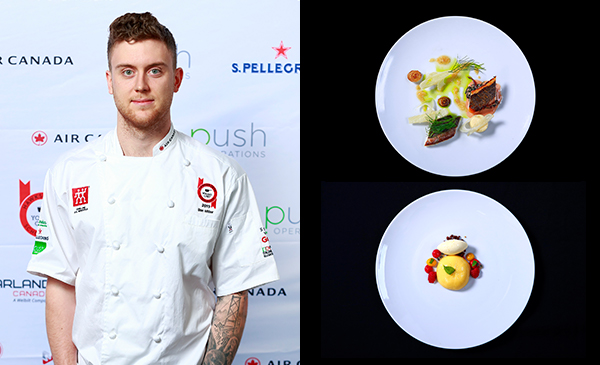 Vancouver, BC (October 11th, 2019) – Vancouver’s culinary cognoscenti gathered at the Dirty Apron Cooking School on Sunday, October 6th to name the 2019 Hawksworth Young Chef Scholarship National Finals winner. It wasn’t long into the highly anticipated day when West Restaurant + Bar’s Sous Chef, Ben Miller showed his culinary finesse against the other seven finalists in a Black Box competition. A panel of ten judges adjudicated the chefs’ abilities to create a main entree and dessert with ingredients such as Sea Bream, Daikon, Passion Fruit, and Dark Chocolate in just under a three hour period. Chef Miller’s Roast and Mousseline of Sea Bream, Fennel, Confit Daikon, Almond Vierge, and Creamed Swiss Chard along with his Orange and Passion Fruit Mousse, Dark Chocolate Crumble, Salted Almond Ice Cream with Young Pumpkin Puree captured the Runner-Up title along with a $5000 cash prize. In addition, Chef Miller was presented the coveted Young Professionalism Award and a $2000 cheque by Gordon Food Service.

“I just can’t believe that what I love to do day in and day out allows me to participate in such amazing opportunities within the culinary community,” enthusiastically says Ben. “I’ve learnt so much from my competitors and mentors about myself and what one can do when they put their mind to it. Congrats to Camilo Lapointe-Nascimento and thank you to the Hawksworth Young Chef Scholarship organization!”