Vancouver, B.C. (January 18th, 2016) – Blue Water Cafe’s executive chef Frank Pabst is finalizing the menu for his well-known annual sustainable seafood festival, “Unsung Heroes”. Now in its 12th year, the month-long festival was originally created to bring awareness to local and unique seafoods, and to avoid species that are over-fished or harvested in ways that can damage ocean beds. 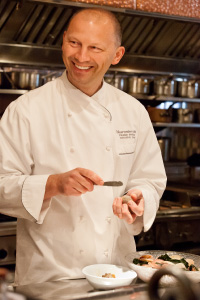 Known for being one of the most-anticipated events on Vancouver’s culinary calendar, Chef Pabst remarks, “The popularity of the event has increased enormously – over 400% since its inauguration. These formerly “unsung” species are now heroes in their own right and have truly entered the mainstream of the public’s mind. Using them also relieves pressure on other stocks of overused marine life.”

Dishes such as red sea urchin trifle, stir-fried jellyfish, and poached periwinkles have been seen on Chef Pabst’s impressive Unsung Heroes menu in prior years. This year, guests can expect to experience new flavours and ingredients – such as limpets – for the first time.

ABOUT TOPTABLE GROUP:
Toptable Group celebrated several milestones in 2015 including the opening of Bar Oso and The Cellar by Araxi, the 25th anniversary of CinCin Ristorante, the 15th anniversary of both Blue Water Cafe and West Restaurant. One of Canada’s leading hospitality groups, Toptable Group has six elegant, yet approachable, venues in Whistler and Vancouver: Araxi Restaurant and Oyster Bar, Bar Oso, CinCin Ristorante, Blue Water Cafe, West Restaurant, and Thierry Cafe. More information can be found online at www.toptable.ca.