Vancouver, B.C. (January 17th, 2017) – Hunter. Gatherer. Forager. It takes a very unique and highly trained specialist from these parts to unearth a prize like the elusive British Columbia truffle. Enter Dexter – the dog who’s a chef’s best friend in more ways than one. Trained by forager Brooke Fochuk, he’s one of only a couple of four-legged friends in the province who can sniff out these prized nuggets and deliver the bounty of the rainforest floor to the table. 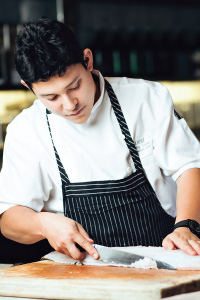 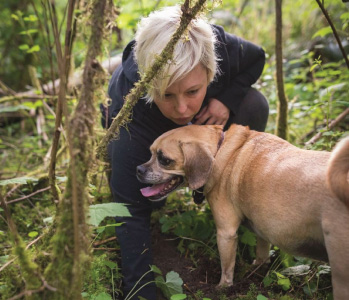 Executive Chef Quang Dang knows a few things about foraging too. When he’s not in the kitchen, he’s likely to be found on a farm or a boat and following Mother Nature’s lead for what’s in season – from hazelnuts to spot prawns. Chef Quang’s passion for all things local is at the heart of West Restaurant’s philosophy, and the perfect muse to celebrate Dexter’s forest finds in partnership with the Truffle Association of British Columbia. Running from February 4th to 6th, the second annual B.C. Truffle Festival brings together experts from all fields in the industry, and culminates with the best of food and wine. At West, the dinner runs to five delicious courses.

“We live in such an amazing part of the world – we have the bounty of the land and sea at our backdoor,” says Chef Quang. “This truffle season is one of the best we’ve had yet, according to Brooke and Dexter. I’m really excited to work with such an array of prized B.C. grown products, from Mediterranean Perigords to Oregon Black and Winter White truffles. This will be the first multi-course B.C. truffle dinner that showcases such distinctive flavour profiles amongst a number of varieties.”

SUGGESTED TWEET:
Dig in for a delish BC truffle dinner with our @ChefQuangDang, a stellar five-course menu of divine delights: https://www.eventbrite.ca/e/2nd-annual-bc-truffle-festival-tickets-31061548929?aff=es2.