Whistler, B.C. (August 16th, 2016) – Award-winning Executive Chef James Walt has released his menu for the 2016 Araxi Longtable Dinner. Taking place on Sunday, August 21st at the picturesque North Arm Farm in Pemberton, the 400-seat dinner in the field will be the largest single longtable in British Columbia history. 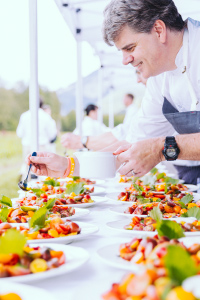 Chef Walt’s menu – a cocktail and canape reception and four-course family-style feast – will showcase the best of the season, with many of the ingredients harvested on-site as well as from nearby fields, pastures, and waters. Bar Oso – Where Magazine’s Best New Whistler Restaurant and Toptable Group’s newest addition and second mountainside venue – joins in the fun. Chef Jorge Muñoz Santos and Bar Manager Jason Redmond will contribute to the menu as well.

Adding more fanfare to the farm-to-table festivities, Chef Walt will debut his much-anticipated cookbook, Araxi: Roots to Shoots, Farm Fresh Recipes. His second book features many favourite Longtable recipes – a number of which appear on this year’s menu – as well as classics from Araxi Restaurant’s dining room.

The 2016 Araxi Longtable Dinner begins with a reception at 3pm, followed by dinner at 4pm. The event has now sold out. To be placed on the waitlist, please email Restaurant Director Neil Henderson at longtable@araxi.com, including your phone number and party size. Tickets are $159 plus tax and gratuity.

Cookbooks, offered at $37.95 plus tax, can be purchased by Araxi Longtable guests on-site and signed by Chef Walt following the dinner. Cookbooks can be pre-ordered online or, beginning Monday, August 22nd, purchased at Araxi Restaurant and fine book retailers.

High-resolution images can be downloaded from our Media Room, password/username: Longtable.