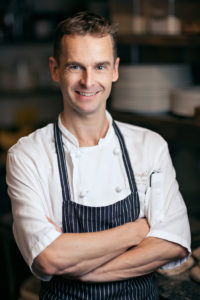 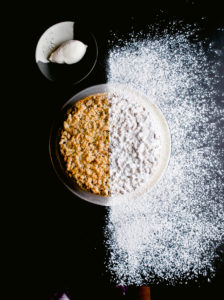 This month, Araxi celebrates 38 years of seasonally-inspired farm-to-table cuisine served with warm-hearted hospitality. In this spirit, we invite you to create and share Pastry Chef Aaron Heath’s Apple + Almond Tart while you gather loved ones in the kitchen and around the table. Serves 12 Makes one 10-inch tart

Place the sifted flour, sugar, salt, and vanilla seeds in a large bowl. Using the largest holes of a box grater, grate the cold butter into the bowl. (This little trick allows you to get the butter in uniformly small pieces without warming it.) Gently disperse the butter pieces, breaking apart any of the larger pieces with your fingertips.

Have a large piece of plastic wrap ready and set aside. Make a “well” in the centre of the flour mixture and pour in all of the cold water. Using a pastry cutter, quickly work the water into the flour-butter mixture. Press the dough together using the backs of your knuckles to create a shaggy but cohesive mass. It will not look uniform—there will still be streaks of butter in the dough—but it should stay together. Form the dough into a rough flat disk, working it as little as possible, and wrap it in the plastic wrap. Refrigerate the dough until well chilled, at least 2 hours.

Using as little flour as possible, roll the dough out to a circle 14 inches in diameter and about ¼ inch thick. Try to roll the dough as round and as evenly as possible. Transfer the rolled dough to a baking tray, cover with plastic wrap or parchment paper and refrigerate for 20 minutes before transferring it to the tart ring.

Loosely crimp the edge of the dough around the top where it will eventually be trimmed off after baking, leaving the extra dough attached. Refrigerate the dough in the tart ring for at least 30 minutes before blind baking. Preheat the oven to 375°F. To blind bake the pastry, line it with aluminum foil. Fill it with pie weights or baking beans and bake for 20 minutes, until the edges are golden brown. Gently remove the pie weights and foil and return the pastry to the oven for 8 to 10 minutes, or until it is completely golden brown. Remove from the oven and set aside to cool in the tart ring on a wire rack while you prepare the apple filling and almond-streusel topping.

Squeeze the juice from the lemon into a large bowl and discard the peels. Peel and core the apples, then slice them thinly and toss these pieces in the lemon juice.

In a saucepan large enough to hold all of the apples, combine the sugar with enough water to just moisten (1/4 cup or less). Cook over high heat (do not stir or the sugar may crystallize) until the sugar caramelizes to a dark golden. You can swirl the pan around to ensure even browning. Stir in the apples immediately along with the cinnamon and vanilla. Cook over high heat, stirring constantly until the apples are slightly translucent and slightly golden. Add the honey and continue to cook over high heat until almost all the liquid has evaporated, 5 to 10 minutes. Transfer the cooked apples to a perforated pan or metal steamer set over a baking tray in the sink and let the apples cool at room temperature while any excess liquid drips out. Remove and discard the cinnamon stick. Meanwhile, prepare the topping and the sour cream.

Combine all the ingredients in a medium bowl and work them together with your fingertips until the topping has the consistency of small peas. Spread the mixture on a baking tray and refrigerate until needed.

To assemble: Preheat the oven to 325°F. Arrange the cooked apples in the tart shell, pressing the slices in firmly. Sprinkle the almond-streusel topping over the apples and bake for about 15 minutes, until the streusel is golden brown. Remove from the oven and allow the tart to cool for at least 20 minutes before slicing.

Just before serving the tart, whisk together the sour cream with the sugar in a large bowl. In a stand mixer fitted with the whisk attachment, whip the whipping cream at high speed until it forms firm peaks, 3 to 5 minutes. Using a spatula, gently fold the whipped cream into the sour cream mixture until well combined.

Place a slice of the apple tart on each plate and garnish with a large spoonful of whipped sour cream. Serve immediately.

Araxi Wine Director Jason Kawaguchi suggests a pairing of Veuve Clicquot Extra Brut Extra Old. “Apple and Almond always makes me think Champagne. Flavours that are frequently displayed in good champagne and the fresh acidity of the wine clean the palate as they water the mouth.”