Shane Taylor Wins 2017 BC Sommelier of the Year!

Prince Edward Island born, Shane’s love of wine began after graduating from the Atlantic Tourism and Hospitality Institute and landing an entry role with Nantucket’s Wauwinet Hotel. From there, Shane would work his way up the hospitality ladder to delve further into the world of wine at the Relais Gourmand White Barn in Kennebunkport as well as Michelin-starred Glenapp Castle and Chapter One in the United Kingdom. Along the way, a WSET Diploma in Wine and Spirits has proved him well and work towards an Advanced Sommelier designation from the Court of Master Sommeliers is a testament to Shane’s commitment to learn and share his craft. 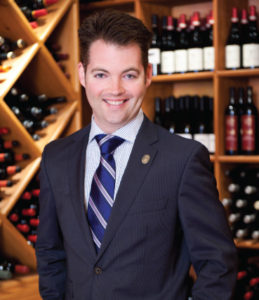 The CAPS BC Sommelier of the Year title is determined by a comprehensive skill set competition that includes a written exam and a hands-on practical test that pits three finalists against each other to determine their knowledge on a number of wine-related topics. The competitors are challenged on their know-how about sparkling wine service, red wine decanting, food and wine pairings, menu writing as well as blind tastings of cocktails, red and white wines.

After a total of sixteen sommeliers took the written exam, three finalists emerged. Mathew Landry (The Stablehouse Bistro) and Todd Prucyk (Hawksworth Restaurant) showcased their impeccable wine knowledge alongside their warm personalities but it was Shane’s grace and charm combined with his passion for wines that shone through for the 2017 win. The distinguished panel of judges for this year’s competition held at Rogers Arena included Veronique Rivest, Barbara Philip, Michelle Bouffard, and DJ Kearney.

“I’m delighted to have been selected as BC Sommelier of the Year and wish to congratulate all my fellow sommeliers who brought their best to the competition,” says CinCin’s Shane Taylor. “I’ve pursued this title for a couple of years now and can say that the journey has taught me volumes about the wine industry and the amazing network of partners that have become a part of the CinCin family.”

Shane’s win as BC Sommelier of the Year is recognized by a collection of prizes that includes two tickets to an upcoming game and a personalized jersey from the Vancouver Canucks, a Delta Air Lines travel voucher for two from the Vancouver International Wine Festival, dinner for two at any Toptable Group restaurant (Araxi Restaurant and Oyster Bar, Blue Water Cafe, West Restaurant or CinCin Ristorante), and a magnum of Moet & Chandon champagne from Moet Hennessy. Shane will go on to represent the province at the CAPS Best Canadian Sommelier competition in Vancouver, BC this fall.

As a not-for-profit organization, CAPS aims to promote and educate the sommelier profession through professional development and networking events related to the wine and spirits industry. Visit www.sommelierscanada.com for more information.