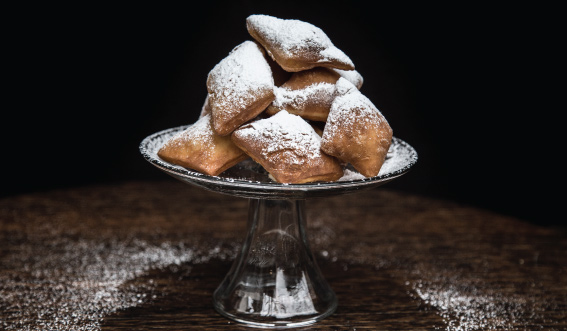 Chef Thierry Busset’s beignet recipe is his mother’s own and truly rivals the best. Dusted with icing sugar, these square-shaped donuts are prepared a la minute and served piping hot with a choice of housemade raspberry jam, or chocolate or caramel sauces. Offered daily from 11 am, we invite you to sit down with a friend (beignets are ideal for sharing) over an espresso or cappuccino, and to enjoy some beignets in the charming cafe or have them packaged to go.

“Making our beignets brings back so many fond memories for me as a child growing up in France,” says Chef Thierry. “I still can recall the fragrance of freshly made beignets wafting through my mother’s kitchen – and taking that first bite dipped in chocolate sauce a few too many times!”

Beginning February 15th through to March 15th, follow your nose to Thierry Cafe and celebrate Fete des Beignets. $10.75 for six.