Vancouver, BC (December 4th, 2015) – At a ceremony convened today before a group of Canada’s leading food service professionals at Toronto’s Fairmont Royal York, Foodservice and Hospitality Magazine’s 2015 Pinnacle Awards were presented to the industry’s elite. Aquilini Restaurant Group, parent company to Toptable Group, was recognized as “Regional Company of the Year”. 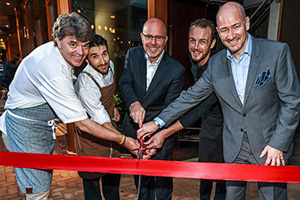 “We are absolutely thrilled for our teams to be recognized in this way,” said Michael Doyle, President of Toptable Group and Aquilini Restaurant Group. “Not only does it recognize our own extraordinarily dedicated team members in each of our venues, but it also draws attention to British Columbia as a front-of-mind destination for hospitality excellence.”

Toptable Group was cited for its Araxi Longtable Dinners, celebrity chef collaborations, and the opening of its sixth property, Whistler’s new Bar Oso, amongst many other achievements. Also recognized was Toptable’s active role in the community with programs such as Ocean Wise and the BC Hospitality Foundation. Aquilini Restaurant Group was saluted for its complete redesign and implementation of the food service program at Rogers Arena, including the addition of the Loge Club.

Founded in 1988, the Pinnacle Awards are the country’s only national food service and hospitality recognition program, and represent the apex of achievement in Canada’s $57 billion food service industry. With nominations from a broad group of industry professionals drawn from across Canada, key criteria in vetting the awards include ‘Impact on Industry’, ‘Significant Innovation and Accomplishments’ and ‘Community Spirit’. Past winners include visionaries such as Toronto’s Oliver + Bonancini Restaurants and Susur Lee, Montreal’s Normand Laprise, and Vancouver’s John Bishop and Vikram Vij.

Toptable Group is celebrating several milestones in 2015 including the opening of Bar Oso and The Cellar by Araxi, the 25th anniversary of CinCin Ristorante, the 15th anniversary of both Blue Water Cafe and West Restaurant. One of Canada’s leading hospitality groups, Toptable Group has six elegant, yet approachable, venues in Whistler and Vancouver: Araxi Restaurant and Oyster Bar, Bar Oso, CinCin Ristorante, Blue Water Cafe, West Restaurant, and Thierry Cafe. More information can be found online at www.toptable.ca.