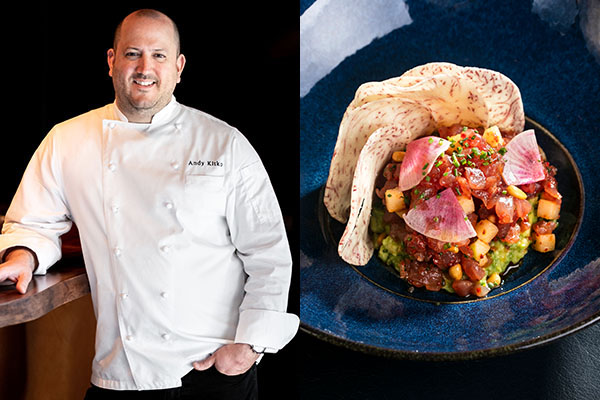 Vancouver, BC (November 20th, 2019) – Exciting news from one of Canada’s leading hospitality companies, Toptable Group as it announces the unveiling of its newest restaurant, Oceans in New York City. Located at 233 Park Avenue South, the timeless and elevated, yet approachable seafood restaurant, sushi and raw bar will open today after almost three years in the making.

“We have always believed that the souls of our restaurants can be found in their kitchens, and this philosophy lives on in this restaurant concept,” says President, Michael Doyle. “The finest ingredients from near and far – crafted by extraordinary culinary talent and delivered with an unparalleled level of hospitality – is what will set Oceans apart and define it as a leading seafood restaurant.”

Focusing on locally and globally sourced seafood, Oceans will celebrate the sea under the direction of Executive Chef Andy Kitko. A longtime New Yorker, who’s earned his superlative culinary stripes with iconic dining rooms such as Estiatorio Milos, STK, Aqua, and Cafe Boulud, Chef Kitko’s menus highlight the freshest catches that are presented as crudos, ceviches, composed plates, or simply grilled and served with the best available seasonal ingredients sourced from the nearby Union Square Green Market. Shareable plates are central to the culinary experience at Oceans, with offerings like Charred Spanish Octopus with marinated Gigante beans and wild oregano or grand seafood plateaus such as the Oceans La Tour with three tiers of the finest offerings available. In addition to whole fish entrees like Branzino and Turbot, composed plates include Dove Sole with an almond caper butter, East Coast Halibut with celery root, braised celery heart and Bagna Cauda, Braised Short Rib with coffee ancho chile sauce, celery, baby carrots, and horseradish gremolata, and Niman Ranch Ribeye with shallot herb butter. 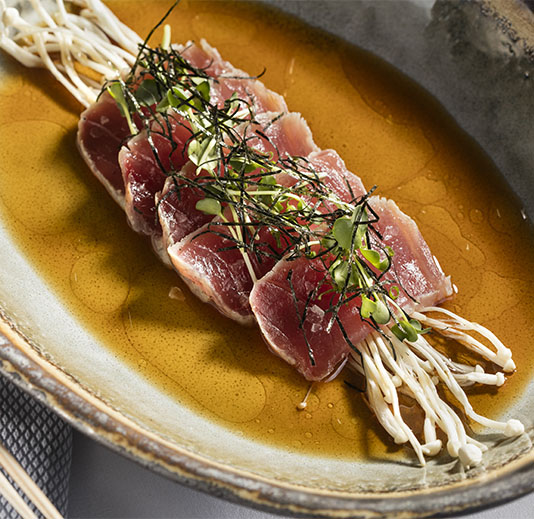 Sushi plays a leading role at the restaurant with an expansive selection of traditional and playful interpretations, and a special Omakase menu available at the 8-seat sushi bar. Standouts from Sushi Chef Yauman Kirana include the Rocketman with Peekytoe crab, seared salmon and truffle miso sauce and the Dragon Roll with crispy prawn, eel, cucumber, tobiko, and Kabayaki sauce. A variety of light nigiri and sashimi round the sushi menu, alongside whole fish sashimi with extra virgin olive oil, sea salt, and lemon.

Seasoned Restaurant Director Thomas Yagoda oversees a talented front-of-house team that defines a refined sense of hospitality in the most approachable of ways. Thomas’ pedigreed career with restaurant stalwarts like Bold Food and the Chapman Group have prepared him well for this next chapter of his career. The art of true hospitality shines through in all the thoughtful touches that are extended from the welcome greeting to the final good night. A passionate and elevated sense of service will benchmark this service team as leaders in the industry.

From the expansive marble bar serving signature cocktails like the Pacific Rim and updated twists on many of the classics, guests are beckoned into a vibrant dining room clad under a stunning white oak-ribbed ceiling for an evening of inspired flavours from the Pacific, Atlantic and Mediterranean shores. Designed by the award-winning Rockwell Group, the 220-seat restaurant features arched window bay seating, an open show kitchen, a large seafood display, a floor-to-ceiling wine cellar housing a collection of over 1200 labels from around the world, and a coveted selection of private dining rooms for larger group events.

Situated at the corner of Park Avenue South and 19th Street in Union Square, Oceans will initially be open 7 days a week for dinner from 5:30 pm and will open for lunch and brunch at a later date. For further information or reservations, please contact Oceans by telephone at 212 209 1055 or online at www.oceansnewyork.com.

SUGGESTED TWEET:
Celebrate the opening of @toptablegroup’s Oceans Restaurant today as they open their doors and hearts to #NewYork! #DineWithOceans https://toptable.ca/toptable-group-unveils-a-flagship-new-york-restaurant