Vancouver, B.C. (January 27th, 2015) – Blue Water Cafe’s executive chef Frank Pabst is in the process of crafting the menu for his annual sustainable seafood festival – aptly named “Unsung Heroes” – for the 11th year. Initially created to bring awareness to local and unique seafoods, and to avoid species that are over-fished or harvested in ways that can damage ocean beds, the month long festival has seen significant growth – over 400% – since its inauguration. 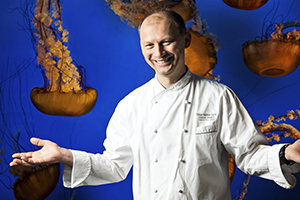 Known for being one of the most-anticipated events on Vancouver’s culinary calendar, Pabst remarks, “The popularity of the event has increased tremendously and these formerly ‘unsung’ species are now heroes in their own right – they have truly entered the mainstream of the public’s consciousness.”

Blue Water Cafe is best known for championing British Columbia’s sustainable seafood movement and is a founding member of the Vancouver Aquarium’s “Ocean Wise” conservation program. The restaurant strives to educate guests on seafood sustainability while providing an exceptional dining experience. Every year, Blue Water Cafe donates 10% of the proceeds from Unsung Heroes to the Ocean Wise program.

Blue Water Cafe is Vancouver’s definitive destination for seafood, widely known for its excellence in celebrating the extraordinary flavours of British Columbia, consistently awarded “Best Seafood Restaurant” in Vancouver, and recognized for its unparalleled service. One of Canada’s leading hospitality groups, Toptable Group has four elegant, yet approachable, restaurants in Vancouver and Whistler: Araxi, CinCin, Blue Water Cafe and West, as well as the chocolaterie, patisserie and café, Thierry. More information can be found online at www.toptable.ca.