Vancouver, BC (June 8th, 2015) – Belvedere Vodka’s ‘The Challenge’ (Americas) took place in New York City recently, with 11 spirited competitors presenting martini cocktails to a panel of international judges. Vancouver’s Sabrine Dhaliwal, who assumed the Bar Manager position at West Restaurant just a few months ago, earned a place in the top three and will go on to compete in London. 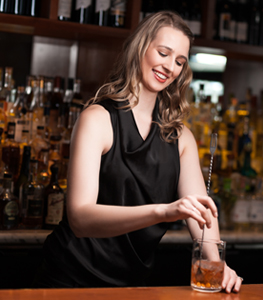 “I was flattered to have been invited to the Americas’ run-off,” states Dhaliwal. “To earn a place in the finals – and as the only female competitor – well, that makes it even more exciting,” she says.

Belvedere Vodka recently partnered with the new James Bond ‘Spectre’ movie, and Dhaliwal was quick to exploit the connection. The ingredients for her two winning cocktails – ‘Pink Skies at Night’ and ‘Departed Disposition’ – were introduced via former Bond women brought back to life.

“Eight Bond women each brought an ingredient to the party,” Dhaliwal says, “for instance Miss Moneypenny brought Lillet Rose for Pink Skies’, and Miss Taro introduced Curaçao for ‘Departed Disposition’. Each of the women shared her story, and I summarized it on a map – a blueprint for the judges. Every drink needs some context, a back story, and I think that might have given me an edge.”

Belvedere Vodka’s ‘The Challenge’ Grand Final will be convened in London from June 16th to 19th, and will include nine competitors from the US, Canada, France, the United Kingdom, Singapore, New Zealand and Australia. The winner will be announced, and the winning martini recipe unveiled, on World Martini Day, June 19th.

Although new to her position as Bar Manager at West, Sabine’s provenance runs deep: She worked alongside multiple award-winning bartender David Wolowidnyk at West for four years. In addition to many other national and international awards, David was crowned ‘World’s Most Imaginative Bartender’ in the Bombay Sapphire competition in 2012, in Marrakech, Morocco. David is now the Bar Manager at sister property CinCin Ristorante + Bar in downtown Vancouver.

Both of Sabrine’s cocktails will be featured over the summer months – warm weather refreshers to be sure – at West, South Granville’s favourite bar and restaurant. For more information about West Restaurant or for reservations, please visit WestRestaurant.com.