2016 Where Magazine’s ‘Where to Dine’ Awards Honour Toptable Group

Vancouver, B.C. (April 27th, 2016) – Today hospitality leaders convened for Where Magazine’s 2016 ‘Where to Dine’ Awards’ which again honoured Araxi Restaurant and Oyster Bar, CinCin Ristorante, and Blue Water Cafe, as well as Whistler newcomer Bar Oso, for their industry excellence. The awards celebrate the best of British Columbia’s local flavours and genuine hospitality, and are selected by Where Magazine’s well-travelled readers.

“These awards acknowledge the hard work, diligence, and creativity of our industry, and continue to highlight Vancouver and Whistler as true culinary destinations,” said Toptable Group president Michael Doyle. “We would like to thank the readers and voters of Where Magazine’s ‘Where to Dine’ Awards for recognizing our teams’ efforts in their pursuit of excellence.” 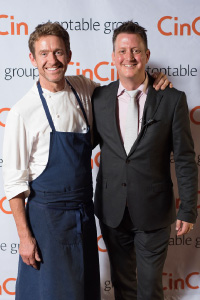 For the sixth consecutive year, Araxi Restaurant and Oyster Bar was awarded “Best Fine Dining – Whistler”. The accolade is a reflection of Chef James’ farm-to-table fare with the magazine also noting, “An impressive array of fresh oysters, a winning wine list and seasonally inspired cocktails round out an elegant experience.”