Vancouver, BC (June 19th, 2015) – Sabrine Dhaliwal of Vancouver’s West Restaurant has been crowned the winner of ‘The Challenge’, Belvedere Vodka’s international contest to create a legendary martini cocktail. Held in London, England, the two-day competition saw the world’s finest bartenders face off in a series of unique and demanding challenges with a jury of international judges. Ultimately, Dhaliwal’s ‘Pink Skies’ martini earned her the victory, fittingly on World Martini Day. 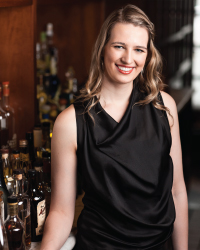 Dhaliwal qualified as a finalist when she placed in the top three in the ‘Best of the Americas’ run-off in New York City. Competitors for ‘The Finals’ included top bartenders from the US, France, the United Kingdom, Singapore, New Zealand, and Australia, and Sabrine was the only woman to qualify.

Belvedere Vodka recently partnered with the new James Bond ‘Spectre’ movie, and in her first martini challenge of ‘The Finals’, Dhaliwal was zipped around London on a motorcycle, directing her driver to four landmarks – Trafalgar Square, The Tower of London, St. Paul’s Cathedral and the Houses of Parliament – to collect mystery ingredients for a Bond-themed cocktail.

Her second challenge on Day One was to create a vodka-based cocktail with a Bond narrative. For this she chose her signature ‘Pink Skies at Night’, complete with a background story based on famous Bond women. 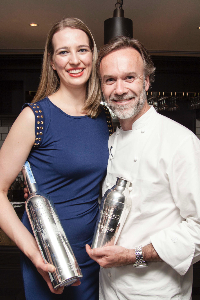 Day Two saw Sabrine’s final challenge. At celebrity chef Marcus Wareing’s new Tredwell’s restaurant in St. Martin’s Lane, the international bartenders were tasked with choosing a course from the dinner menu, and matching an original cocktail of their own creation. “Most of us were in the same boat,” Dhaliwal said. “Fighting jetlag in a strange city, whisking around picking up mystery ingredients, providing contextual narratives for what we were making. I had a secret ingredient of my own though – I dialed in my inner Miss Moneypenny!”

At the end of the dinner, the judges weighed in with their remarks, and then their marks. A somewhat surprised, but absolutely delighted Sabrine Dhaliwal was announced the winner. “In the fog of fatigue, it took a few moments to sink in,” stated Dhaliwal. “And then pure joy – I am just so thrilled to be bringing this award back to Vancouver and the team at West.”

Sabrine’s award-winning cocktails will be featured over the summer months at West Restaurant. For more information about West Restaurant or to make reservations, please visit westrestaurant.com.